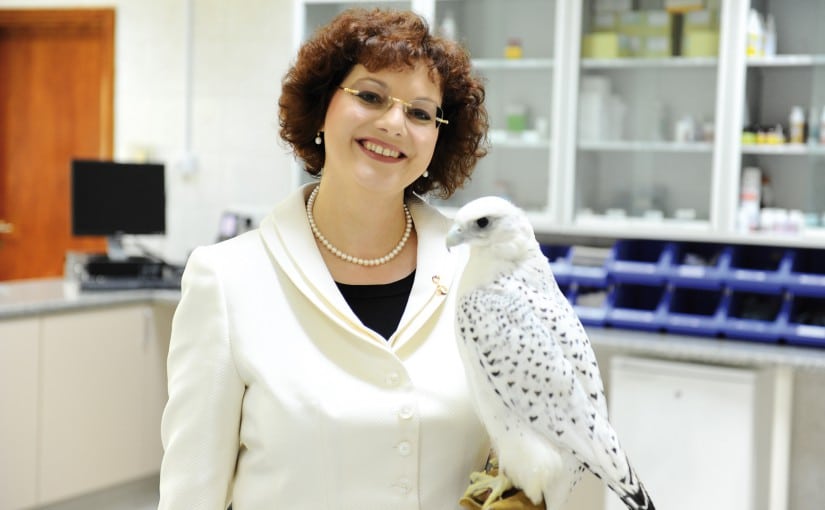 They fly first class, dine on quail, receive the best possible all-round treatment and are passionately venerated. Hunting falcons enjoy the status of family members in the Arab world. If a bird falls sick, the owner does too – with worry. This is a case for Dr. Margit Gabriele Müller, head of the world’s largest falcon hospital, in Abu Dhabi. The German veterinarian knows how to handle falcons – and people.

Dr. Margit Müller’s working day is never truly at an end. It is no rarity for her sleep to be interrupted by a falcon emergency. This is nothing out of the ordinary for the vet. She lives for the majestic birds of prey, which receive the best possible medical care at the royal falcon hospital in Abu Dhabi.

ONLY THE BEST FOR THE PLUMAGED PATIENTS

In the waiting room the falcons sit on perches covered with artificial turf to protect their sensitive feet. To avoid stressing the birds and to prevent them from attacking their fellow patients they wear leather caps over their majestic heads. The falcons are not always seriously ill, some of them visit merely to have their claws and beak trimmed or to have a check-up. Minor operations such as feather implants are performed in an outpatient capacity. More serious cases, such as broken wings or lung disorders, require inpatient care, for which the falcon hospital is ideally equipped. Doctors perform their rounds here, too, almost like in a “real“ hospital. There is also no lack of necessary infrastructure: there is an x-ray room, operating theatres, an intensive care ward and a quarantine ward – even a mortuary. A staff of nearly 100 cares for the birds at the hospital. The five doctors on the team are certainly never troubled by boredom, approximately 6,000 falcon patients are treated at the clinic each year. The falcons receive the best possible medical care. If they are fit enough, they are allowed to fly in the enormous, air-conditioned aviary, which is designed for up to 100 falcons.

FROM MUNICH TO ABU DHABI

Dr. Margit Müller was already fascinated by the heraldic animal of the UAE when she was still in Bavaria, before moving to the desert state of Abu Dhabi. Her doctoral thesis, completed at the University of Munich, was dedicated to the skilful hunters. When Margit Müller was offered a position at the Abu Dhabi Falcon Hospital in 2001 the veterinarian received a unique opportunity to com – bine her profession and her calling. Night duty, rescuing seemingly hopeless cases, successful completion of complicated surgery – she has earned the recognition and respect of the male falcon owners. Numerous awards and distinctions decorate the walls of the falcon hospital. In 2008 His Majesty Sheikh Mohammed bin Zayed Al Nahyan presented Margit Müller with the Abu Dhabi Award for her services to falcons. Margit Müller’s affections are not limited to birds of prey, however, she now also takes care of stray cats and dogs, co-operating with an animal protection organisation to rehouse the animals.

Surviving in the desert means learning to live with it. This is how the Bedouin existed in the times before the oil boom. They kept falcons to liven up their sparse and monotonous diet. The trained birds would sometimes catch a rabbit or a bustard, thus ensuring a supply of fresh meat. In order to protect and support this millennia-old tradition, 2010 saw falconry gain UNESCO recognition as intangible heritage. The veneration of the noble birds of prey remains undimmed in the Gulf states to this day. Females in particular are prized as “house birds“. They are not only larger than their male counterparts, they also display greater endurance whilst hunting. The falcons participate in family life, quite literally. They sit in the living room and are pampered and cared for like children. The wellbeing of the birds is a prime concern for their owners. If something happens to one, they will travel long distances to bring it to Dr. Margit Müller. The falcon hospital in Abu Dhabi is renowned beyond the borders of the emirate itself. Prices of up to 60,000 US dollars and more are possible and no expense is spared. FALCONS ARE HAPPIEST IN THE DESERT

The head of the falcon hospital takes care of all aspects of her patients’ welfare. Not only are illnesses cured, injuries treated and check-ups carried out, the vet also keeps an eye on how the falcons are kept. Many birds do not receive sufficient exercise, which often results in disorders of the feet and a tendency to be overweight. The birds need to be trained and exercised in the desert daily, mornings and evenings. However, hunting with the birds of prey is not per mitted in the Emirates. As a result, many owners travel with their birds to countries such as Morocco or Pakistan, where this is allowed. Such travel is possible thanks to a falcon passport developed by Margit Müller, as the strictly-protected birds are not permitted to leave the country without identification. The “Müller patients“ are registered, with some even bearing an implanted microchip. The birds of prey travel by plane – and in style, naturally. The falcon has its own seat, next to its owner, by the window, to avoid it being disturbed by passing passengers. There is an Arabic saying, “Choose your travel companion before you choose your route.“ The falcon leads its companions into the desert. Back to the traditions of the Bedouin, back to the roots for man and bird.