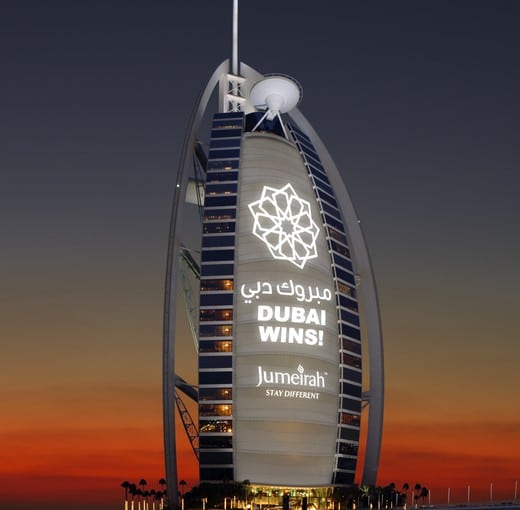 It was a decision that was awaited with the greatest of expectation in the UAE: who would host the Expo 2020? When the final vote counting took place in Paris at the end of November 2013 the result met with a delighted response: Dubai would host the World Fair in 2020.

Dubai’s candidature under the slogan “Connecting Minds, Creating the Future“ was fated for success. After the Brazilian city of São Paulo and the Turkish coastal city of Izmir were both no longer in the running to host Expo 2020 the Emirate of Dubai only had to overcome Yekaterinburg, in Russia. And it duly did so. With 116 votes to 47 the metropolis on the Persian Gulf became the chosen venue. The decision was made by the 154th meeting of the Bureau International des Exhibitions (BIE), with representatives of the 168 BIE member states. When the result was announced cheers went up from the delegates of the United Arab Emirates, led by foreign minister Sheikh Abdullah Ben Sayed al-Nahyan. The result was not only met with delight in Dubai, but throughout the UAE. In Dubai things are thought out, planned and constructed in the superlative. The preparations for the World Fair in six and a half years’ time are no exception to this. Between October 2020 and April 2021 over 25 million Expo visitors are expected in Dubai, 70 percent of whom will come from countries outside of the UAE – making it the largest number of international visitors in the history of the World Fair. And it goes without saying that Dubai not only aims to be an attractive travel destination for the six months of the Expo, but also in the time after the mega event, as well in the years of preparation, as His Excellency Helal Saeed Al Marri, Director General of the Dubai Department of Tourism and Commerce Marketing (DTCM) and CEO of the Dubai World Trade Centre, confirmed: “The real worth of an event such as this in Dubai lies in its legacy. Numerous economic sectors in Dubai, such as the construction sector, industrial technology, transport and of course the hotel and restaurant trade, retail and aviation will benefit from the Expo and further solidify their already strong position. The announcements made at the recent Dubai Airshow were an indication of the extraordinary strength of the air transport sector in Dubai and the UAE, with retail a further key engine of economic growth. With regard to the hotel and restaurant sector, we currently have over 82,000 hotel and apartment rooms in Dubai, and we estimate that we will double this number by 2020. With this expanded hotel port. It was a decision that was awaited with the greatest of expectation in the UAE: who would host the Expo 2020? When the final vote counting took place in Paris at the end of November 2013 the result met with a delighted response: Dubai would host the World Fair in 2020. folio we will be able to more than meet the accommodation requirements of the Expo visitors. The DTCM (Dubai Department of Tourism and Commerce Marketing) will co-operate closely with tourism partners from the public and private fields in order to guarantee the necessary infrastructure and optimal procedures for the anticipated 25 million visitors.“

The Emirate of Dubai will use the Expo 2020 as an opportunity to present itself as a modern, international metropolis with pioneering development and vision. No cost is being spared in implementing this. Around 6.5 billion dollars are to be earmarked for the exhibition site alone, which will be situated between the airports of Dubai and Abu Dhabi, the capital of the UAE. In return, it is hoped that well over 200,000 new jobs will be created, accompanied by a significant rise in the already impressive tourism figures. “We reiterate our promise of surprising the world in 2020,“ says the Emir of Dubai, His Highness Sheikh Mohammed bin Rashid al-Maktoum, Vice-President and Prime Minister of the UAE. The Expo will “lend new impetus to the Middle East in its role as cradle of culture and creativity.“