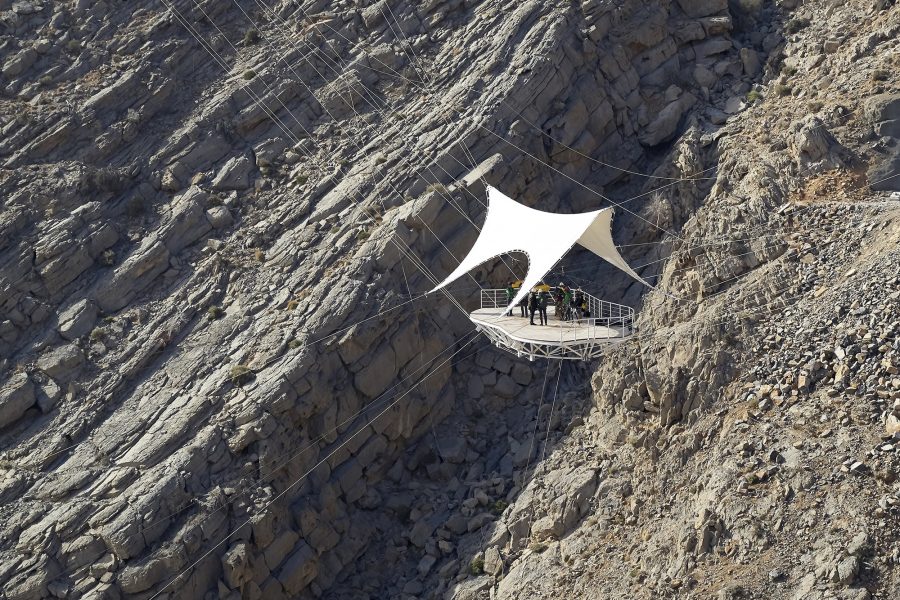 The world’s longest zipline, measuring 2.83 kilometers – the equivalent to over 28 soccer fields, and spanning the chasm of Jebel Jais, the UAE’s largest mountain peak at over 1,680 metres above sea level, opened to the public on February 1st, and is expected to achieve a strong following among thrill seekers and adrenaline junkies from across the world, who are interested in extreme adventure activities.

Delivery of the zipline, which features a steel cable weighing more than six tonnes and is suspended 1,680 metres above sea level, has been in the planning phase for over a year. The process involved extensive feasibility studies, master-planning, comprehensive surveys, soil tests and construction simulations. Maintaining sustainable environmental practices within all construction acts, strong anchor holes were drilled into the rugged Hajar Mountains that alone took over six months. Thrill-seekers will be suspended above the mountain as they prepare to take the flight headfirst in a ‘superman’ style position. The experience will see participants fitted with a special suit and equipment for the adventure, with the longest flight itself taking approximately two to three minutes. Once completed, guests will finish the bucket list flight on a suspended landing platform – unique in the world – where they will be transferred to a second line, measuring in at 1 km, to complete their journey back to the ground.

There are no age restrictions on ‘pilots’ but the requirements are a maximum weight of (150 kg) and minimum weight of (45 kg) for ‘fliers’ who must be at least 120 cm tall. The price is AED650 per rider. “We also believe given its location in Jebel Jais, which is traditionally 10 degrees cooler than average UAE temperatures, we  can operate during the summer months,” added Jorge.