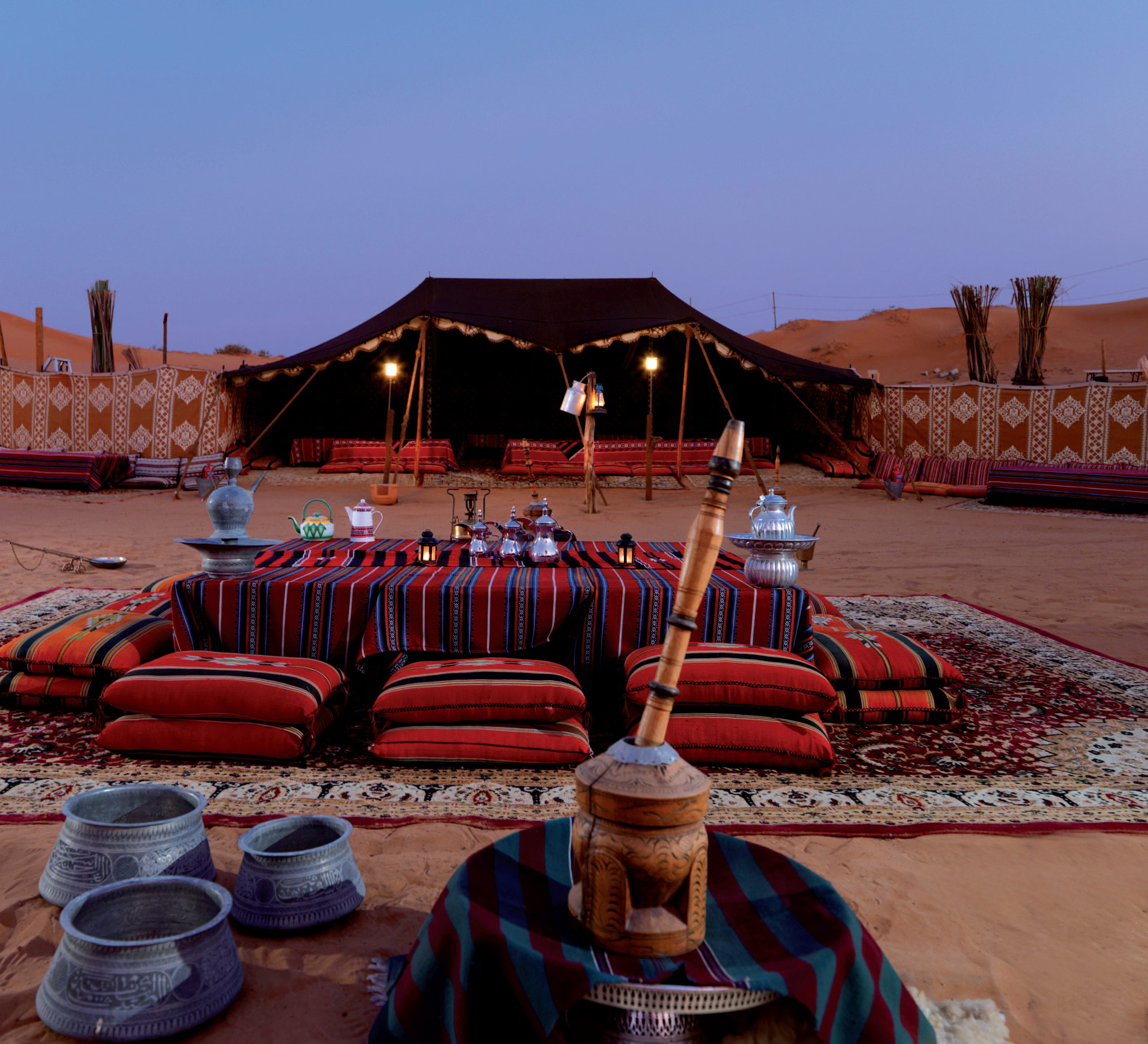 So much natural beauty and so many leisure activities combined on just 1,700 square kilometers. The small emirate of Ras Al Khaimah is a big player as far as variety is concerned. Tourists will find all they could wish for from a nature, beach and adventure holiday here, in the north of the Arabian peninsula. Sea, desert and high mountains delight outdoor fans from through – out the world. Wellness enthusiasts appreciate the select offers of the luxurious hotels and resorts. Ras al Khaimah enchants its visitors in many respects.

Literally translated, Ras Al Khaimah means “Top of the Tent“. The name of the seventh emirate in the United Arab Emirates describes its unique location: surrounded by three emirates, between the Hajar Mountains and the Arabian Gulf. As the name Ras Al Khaimah appears to be unpronounceable to many, the emi rate bordering Dubai is often referred to as “RAK“. Thanks to its mountain springs and mild climate, it is the most fertile of the seven emirates and the “breadbasket of the United Arab Emirates“. In addition to cereal, Ras Al Khaimah also supplies Abu Dhabi, Ajman, Fujairah, Sharjah, Dubai and Umm Al-Quwain with vegetables, fruit and dairy produce. INSIDE TIP FOR TRAVELLERS Ras Al Khaimah is considered to have the most attractive landscape of the emirates. The charming landscape with snow- white beaches on the 64-kilometer-long coast, soaring sand dunes and 1,900-metre high mountains draw increasing numbers of tourists to the attractive emirate. These also ensure that the population increases by five percent annually, because the boom in visitor numbers creates jobs in the region. The population there currently numbers around 300,000. Its diversity makes it one of the fastest-growing tourism regions in the UAE. Soon Ras Al Khaimah will no longer be an inside tip for travellers who appreciate tradition, sporting activity and untouched nature. Once the home of pirates and pearl fishermen, now a luxury holiday destination. In 1819 Ras Al Khaimah was attacked and occupied by a British naval force. After the conflict had abated the area was known as the “Trucial Coast“. The name remained until independence in 1971, when the United Arab Emirates was formed. Sheikh Saqr bin Mohammad Al Qaisimi, in power since 1948, subsequently led the pearl fishermen to prosperity. Sheikh Saqr remained head of the emirate until 1999. His son, Sheikh Saud, led the country from 2003 as Crown Prince and Emir, introducing significant organisational and economic reforms. He has been the official ruler of the emirate since 2010. A particular focus of the Emir, who studied Economics at the University of Michigan in the US, is the promotion of tourism. One consequence of this was the founding of the Ras Al Khaimah Tourism Development Authority (TDA) in May 2011, which was supported by a multimillion- dollar investment up to the end of 2013, with the goal of establishing the emirate as a luxury destination for holidaymakers, adventurers and business travellers. And the project has been successful. Tourism is now one of the leading economic sectors. There are already numerous luxury hotels in the emirate and the construction boom continues unabated. Ample sun and the mild climate of Ras Al Khaimah create the ideal prerequisites for a holiday. It is advisable to visit the region between October and April, as then the thermometer rises to 28 – 35 C°.In July and August temperatures of over 40 C° are to be expected.

The emirate is linked to regional air transport via Ras Al Khaimah Airport. The Emirates Road serves as a connection to the other emirates. The emirate is around 45 minutes from Dubai Airport and 2.5 hours from Abu Dhabi Airport, with both cities served by daily flights from Europe, and flights to the UAE taking around 6 hours. Jet lag is unlikely, in the summertime the time difference is just two hours ahead, in winter three. A passport is required to enter the UAE, with this valid for at least six months after planned departure. With passport control at the airport Europeans receive a free tourist visa with the stamp in the passport. The visa is valid for 30 days, and can be extended for a further 30 days in return for a fee. Children are required to have their own passport. For the cosmopolitan Emiratis it is natural to respect foreign cultures and religions. Their Moslem belief has no effect on international visitors, who should also treat the country with respect by familiarising themselves with its customs and observing these. Western clothing is not a problem as long as it is not too revealing. Shorts and bikinis belong on the beach or by the hotel pool, with knees and shoulders covered when shopping or sightseeing. Displays of affection amongst couples, such as kissing or cuddling, is not permitted in public. The United Arab Emirates are known for their unusually low crime rates. Ras Al Khaimah is no exception. The emirate is not only a highly varied destination, it is also a very safe one.