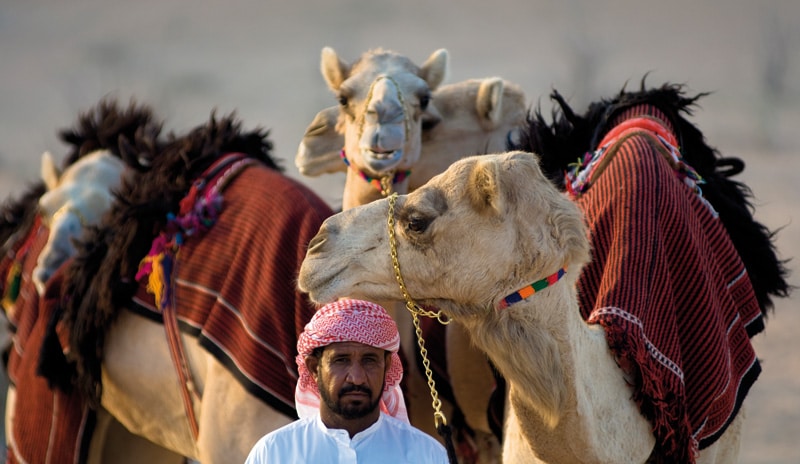 … the poetic translation of Sharjah. A more than fitting name for the third largest emirate in the UAE. Sharjah lies partly on the Persian Gulf and partly on the eastern coast of the Gulf of Oman and is slowly emerging from the shadow of its larger neighbours Dubai and Abu Dhabi, just a short drive away. And rightly so. The small emirate has much to offer. Unusual natural settings, unique artistic and cultural diversity delight more and more tourists from year to year.

CULTURE CAPITAL OF THE ARAB WORLD

For culture-loving travellers a visit to the approximately 2,600 km² emirate with its eponymous capital is more than worth – while. In 1998 Sharjah was named Cul ture Capital of the Arab World by UNESCO. A significant distinction, but not the only one: in 2015 all attention will be on the festivities in its role as Captial of Arab Tourism. The emirate gained this distinction thanks to its remarkable contribution to the preservation, promotion and spread of local, Arab and Islamic culture. This is an issue close to the heart of His Highness Sheikh Dr. Sultan bin Mohammed al-Qasimi, Member of the Supreme Council of the UAE and Ruler of Sharjah, who is dedicated to the protection and preservation of the artistic and cultural diversity of Sharjah. Whilst other rulers were putting up skyscrapers, in the early 1980s he established over 20 museums. A love of art is in the genes of the ruling family: in 2009 Princess Hoor al-Qasimi, daughter of the sheik and herself an artist, took over the leadership of the Sharjah Art Foundation. Her enthusiasm and commitment can be seen in events such as the Sharjah Bien nale, the largest event for Arab contemporary art, which will draw numerous art lovers back to the small emirate next year. Until the 1940s the chief source of in – come for Sharjah was pearl fishing. Life in the sleepy region changed dramatically with the discovery of oil in 1972, in the Mubarak Oilfield near the island of Abu Mousa. Oil has been extracted in Sharjah since 1974, gas since 1990. Today, the emirate has ten percent of the world’s known oil reserves. Despite the wealth and progress, Sharjah still places great value on preserving its Arab identity. This is no emirate of superlatives. Instead, the emirate places greater emphasis on preserving its unique culture and nature – and this did not begin with the onset of oil wealth. As early as 1907 the first school in the Emirates was opened in Sharjah, the Al-Islah-al-Taymeya school. The first library in the Emirates, the Al-Taymeya Library, followed in 1933. And in 1942 Sharjah was the first emirate to grant women access to education. Sharjah is an attractive and familyfriendly travel destination for tourists who are not necessarily looking for hightech entertainment. Value for money in the hotels and restaurants is outstanding. The historic old town with its numerous alleyways and palaces is a highlight in its own right. And let us not forget the shimmering coasts with their fabulous sandy beaches, the picturesque desert landscapes and the oldest mangrove forests in Arabia. In the city, modern shopping centres, traditional souks, impressive mosques and unique museums await tourists from around the world. The “rising sun“ with its cultural heritage and natural beauties has truly a great deal to offer its visitors. Sharjah is a paradise for sun lovers. Cloudless skies, warm temperatures on land and in the water. It is advisable to visit the desert metropolis between October and April, as then the thermometer seldom rises above 30 C° in the daytime. During the rest of the time tourists should brace themselves for the heat, and sightseeing at 40 C° and over is not for everyone.

Travellers can fly direct to Sharjah International Airport with Qatar Airways and a stopover in Doha. Sharjah is also less than a half-hour drive from Dubai Airport, which is served daily from Europe. After an approximately six-hour flight passengers land at the international airport of Dubai. Jet lag is unlikely, in the summertime the time difference is just two hours ahead, in winter three. A pass port is required to enter the UAE, with this valid for at least six months after planned departure. With passport control at the airport Europeans receive a free tourist visa with the stamp in the passport. The visa is valid for 30 days, and can be extended for a further 30 days in return for a fee. Children are required to have their own passport

Sharjah is more traditional and conservative than its neighbours Dubai and Abu Dhabi. Alcohol is strictly forbidden, including in hotels. With regard to clothing and behaviour, visitors should show respect to the Islamic faith. Western clothing is not a problem as long as it is not too revealing. Bathing costumes belong on the hotel beach or in the pool, knees and shoulders should be covered when sightseeing and shopping. Provocative clothing (close-fitting, bare midriff, see-through etc.) is also a no-go, as are overly brief shorts for men. Displays of affection amongst couples, such as kissing or cuddling, are not permitted in public.

The United Arab Emirates are known for their unusually low crime rates. Sharjah is no exception to this. The emirate is not only a very beautiful destination, it is also a very safe one.